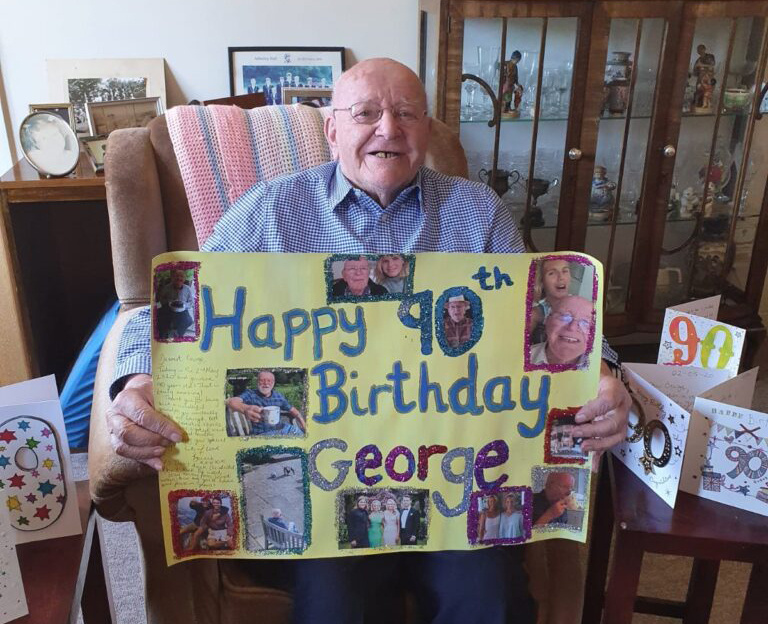 George, an Alton client since 2017, reached the grand old age of 90 years this week. Wearing his new shirt and trousers for the occasion, he was presented with a special card and cake by Mary Rabbitts, his carer.

Below is his biography, kindly given to us by his daughter. He has had a very interesting and varied life and we are delighted to be able to share his special day with him. Happy 90th Birthday George!

Shortly after his birth in North London on 2nd May 1930, the family moved to The Plough public house in Surrey Docks, South London when his father took on the licence. At local school his singing got him a place in the choir and the church school. He thrived in the busy docklands and loved the River Thames.

When the war started he was evacuated with his older brother first to Eastbourne and then to South Wales, fortunately to a kind  farming family. He has happy memories of herding and milking cows, feeding pigs and chickens and can still sing the first few verses of the Welsh national anthem!

He returned home in 1941 and lived through the blitz helping his mum and dad in the pub where he impressed a senior River Pilot who offered him an apprenticeship. So at 14, he gave up a promising school education to work on his beloved river. Working long unsociable hours from tide to tide, in all weathers, he developed the skills and river craft on barges and lighters and after four years was awarded his licence and Freedom of the Company of Watermen and Lightermen of the River Thames (which staff the Queen’s Royal Barge). His work involved pulling barges, often with chains around his shoulders, along docks, canals and wharves and rowing the barges out onto the River to be met by tugs to tow barges upstream.

Two years national service in the army took him to Egypt, taught him vehicle mechanics and to drive.  His pub experience, and good character,  got him picked for very cushy roles in the Officers Mess, many episodes he happily recalls.

Back in civvies he made river history by becoming the youngest skipper of a Tug and the last man to pull and row rafted timber (about 50 tree trunks chained together in the river) out of Surrey Docks. Sadly containers and deeper docks at Tilbury, plus regular dock union strikes, meant trade was disappearing from the central docks and his firm collapsed in 1972. He continued to work on river pleasure boats taking parties up and downstream day and night for five more years until he took onshore work as a Postman.

George met his wife Joan just before his army service and again on his return. They married in 1952, moved to a new town in Surrey and had four boys and finally a beautiful daughter. George had many happy years with Joan but sadly, after retiring Joan suffered with dementia and they moved to Alton where George cared for her until she died in 2011. He always has a smile for his eight grandchildren who love and adore him and have provided five great grandchildren who think “Parn” George is cute and very funny.

Part of the Vopa Group of companies

Part of the Vopa Group of companies